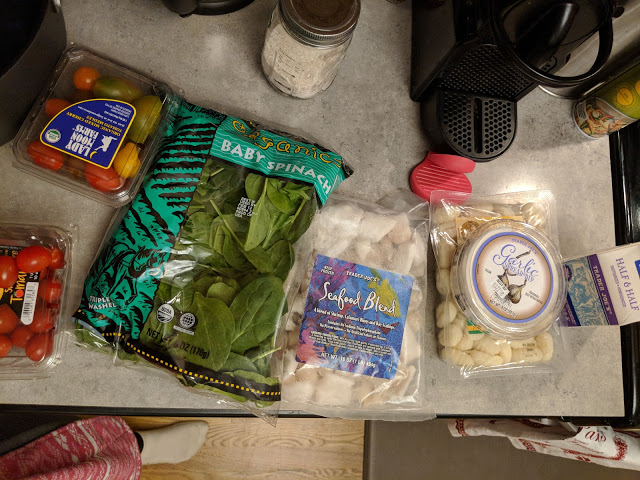 I got the inspiration for this recipe from a group on Facebook called Trader Joe’s Meal Ideas for Busy Moms. Someone there suggested a scallop, spinach, and tomato saute. I switched it up a bit and added gnocchi and it was so easy and delicious!!

For many things I cook nowadays, I don’t measure. It’s faster, easier, and less clean up. This recipe is one of those no-measure recipes. So if you’re not into that kind of thing, this may not be for you. Also –you could also easily make this vegetarian just by leaving out the seafood or if you don’t eat seafood, you could use chicken instead. I used the Trader Joe’s seafood blend of shrimp, scallops, and calamari and it was really nice in this dish!

Here’s what you need:

Here’s what I did:

Note: I threw the seafood in frozen, but if I did it again I would probably defrost it first because instead of a saute it was more of a simmer because of all the liquid that came out… So after it was cooked, I drained all the liquid and added just the seafood back to the pan.

Author: Christy
Filed Under: Eat, Recipe Ideas
Chicken in a Bucket
For the Luck of the Irish: Blarney Stones