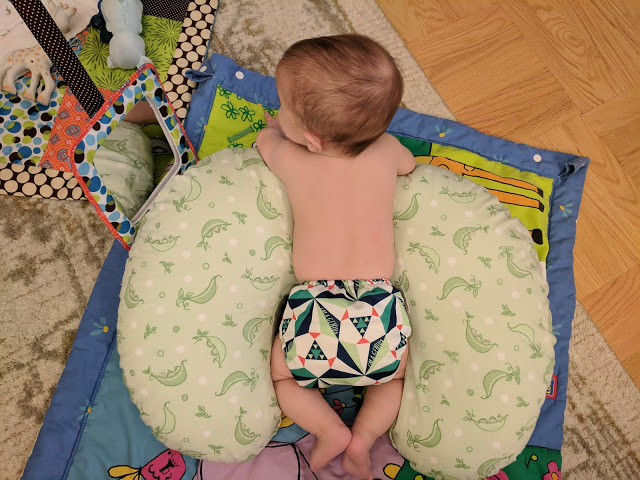 I never thought I would become a cloth diaper-er. Before I was pregnant, I didn’t understand why my friends with kids would want to add one more thing (extra laundry, no thank you!!!) to all the other things they needed to do! One day when I was only a few months pregnant, we were shopping with family at Fredericksburg Natural Baby, and the shop owner was in the store and started asking us about cloth diapering. We got to talking and less than one hour later, she had convinced me that I could, should, and would do this, and I pretty much had my mind made up!

It actually makes me happy to not throw away a diaper every time we change one. I enjoy saving money on it, too! The money saving aspect is what initially caught my attention and really made me want to cloth diaper. Other benefits are that we never have to worry about having diapers on hand in the right size(s) and don’t have to take diaper trash out constantly. And, our little ones have the cutest little bums around!

I use BumGenius Freetime All in Ones. I find them to be extremely easy for an exclusively breastfed baby. (With the addition of solids, I found that using a flushable liner (flush the liner at your own risk) worked great with my first baby but my second baby didn’t need liners at all.) The Freetimes work great both during the day and for overnight (although once I had 2 babies I started using disposables at night because it was just easier that way.) At some point when we were using them for overnight, we added in an extra absorbency (or two, depending on the kid) layer for night time. They have leaked a handful times, but compared to when we use disposables, there is actually much less leakage. Particularly, many less explosive blowouts. With explosive up the back messes, the elastic on these diapers really keeps it in. I have found that when there have been leaks it is usually because they were not snapped tight enough. The snaps on the Freetimes allow for a customized fit.

As for the wash, I had to experiment until I found a wash routine that worked. I have about 30 diapers and I wash when I get down to 12 or 14 clean ones which means I am usually doing a diaper wash every two to three days, it just depends. I do a separate pre-wash followed by a long hot wash. I have been using Gain because it smells nice and gets the diapers clean. I add in a little bleach once a month as recommended by Bumgenius. I hang them dry on this nifty rack that we installed in a closet.

I also use cloth wipes because it is easier to just throw them in with the diapers than to have to throw wipes away separately. I just spray water on the cloth and use it as a wipe. I find that it is much gentler on my children’s skin than disposable wipes. I also use a reusable pail liner that just goes right in the wash with the diapers!

Overall, cloth diapers cost more up front and add an extra load of laundry every couple of days. However, the cost savings over time and the reduced waste from not sending as many diapers to the landfill really makes me love cloth diapering!