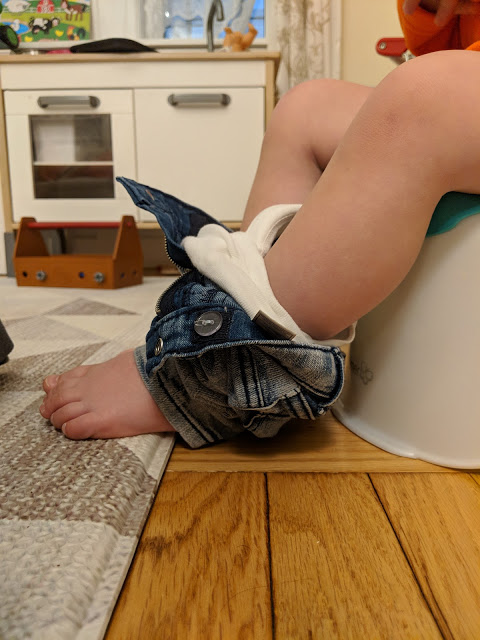 On an incredibly cold December day we decided to start potty training our 2.5 year old. I had told myself I would just wait until he was completely ready, but we were at a point where I felt like he was ready enough, and I was more than ready. Every time he peed his cloth diaper would overflow and we would have to change diaper + pants, so I just decided it was time to go for it. Looking back, it was the perfect time. He caught on so fast and since it was so cold outside, we didn’t leave the house for about a week after starting, which gave us lots of time to practice!

I didn’t read very much about what to do before we dove in, and it turned out I didn’t really need to. I had read enough on the mom’s groups to know that one of the most popular methods is to just go pants-less for three days until they get the hang of it. One thing I had read that made sense to me was that you need to think of it as re-training them out of going in a diaper. If you switch straight from diaper to “big boy underwear” it will feel the same to them and they won’t know the difference. So you spend a few days with no pants so that they see, feel, and understand what is happening when they get the urge to go!

The first day, he started out with accidents all morning because he hadn’t learned to recognize when he needed to go to the potty. I started to second guess if he was ready or not. But after his nap that day, he had very few accidents. And over the next couple days he had almost no accidents!

At the end of the second or third day (I can’t remember exactly when it was), we made a big deal about him being ready for big boy underwear, and he tried to run away when I tried to put it on! So in an act of desperation, I told him that part of getting his big boy underwear is that he gets to take a trip to the chocolate store with his auntie once he puts it on — and that sure put a little spring in his step! It ended up being perfect because it was like a little celebration for him, which I felt like he deserved after all the hard work he had done!

We decided to go with this plain white underwear, and were/are so glad we did! These are the reasons it made sense for us:

We prepared for potty training in advance by installing these new toilet seats that included a child size seat built into them. We also found it really useful to have a child-sized potty that we have had in our living room for the past month for those quick trips to the potty. He likes to use all of the potties, and we are happy to encourage his new independence by temporarily keeping a potty in our living room! I think we will phase this out in the next month or so, but we will see how things go.

Once he was fully trained, we started venturing out and I still can’t recall an accident he has had while out and about. He has had a few accidents at home, but has done really well out and about. He does hesitate to want to use public toilets but he has used them when he tells me that he really has to go. If we go somewhere far that requires us to go on the bus or train, I put him in a pull up. I told him that pull ups are “special big boy underwear” that won’t let your pants get wet if you have an accident. He really liked this and I think it will be a long-term solution for us if we are ever going to be out in the city with limited/no access to toilets.

We decided to only train him during the day and not for naps and nighttime, and we have been happy with this decision and he hasn’t had too much of a problem understanding that he wears a diaper at night and for naps. We always just remind him when we put his big boy underwear on that he needs to tell us when he needs to use the potty. And we told him that it is hard for him to know when he needs to go at night so it is okay for him to go in the diaper at night. He does try to delay going to sleep by continually asking to use the potty, but for the most part, it hasn’t become too big of a problem.

Overall, a month in, this has been pretty smooth sailing, and I’m so glad we did it when we did. Watching him succeed and feel independent and confident has been very rewarding and joyful to experience. And, it’s been a huge plus only having to change the baby’s diapers 😉