Traveling with a Two Year Old 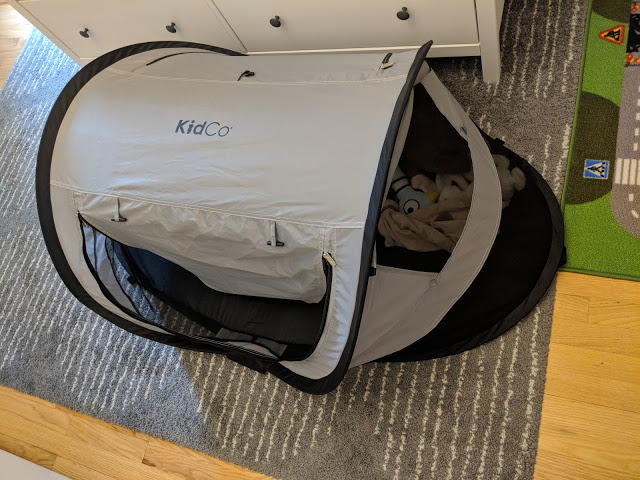 Traveling at age 2 (he was 2.5 when we traveled) was the easiest age yet! I already posted about our airport and airplane experiences here, but I thought I would do a little follow up post specifically about how we traveled with my 2 year old once we got there.

A few weeks before the trip, we introduced him to the Kidco Peapod Plus. I wanted him to try sleeping in it at home so he could get familiar with it before the trip. I planned to use the tent for him to sleep in on the trip because I knew he could climb in and out of a pack-n-play. He hadn’t yet climbed out of his crib but he had been climbing in and out of his brother’s pack-n-play all the time!

It was a smooth transition to the tent, and he sleeps in it all the time now, actually. He climbs in and out of his crib, though now, but stays in the tent for the most part. One night he asked to sleep in the twin bed in his room, but when we went to get him up in the morning, he was zipped up inside the tent! I think he finds the tent cozy and comforting and he really does love sleeping in there. He can independently zip himself in and out of the tent, but I have told him that he has to stay in it until we come get him in the morning, and he has only broken that rule once. After he did break the rule, I explained to him he needed to wait for us, and he has listened. The only trouble I have had is at naptime when he does try to get out of the tent and play instead of nap. But I have solved that issue by tying a pipe cleaner between the two zippers at naptime so he can’t unzip the tent. It has not been necessary to do that at any other time except naptime, and has been effective at getting him the much-needed mid-day down time that he needs!

To make the rooms we stayed in dark, I planned to use blackout fabric and tape it up using gaffer’s tape — this tape is amazing because won’t damage the wall and holds up the heavy fabric really well. However, I forgot to pack it at the last minute (I guess I need to add it to my packing list!), so we didn’t have blacked out rooms. It would have been better if I had remembered to pack it, but we survived without it! For previous trips, it has worked perfectly.

For entertainment, we used the Amazon video app on an old phone + toddler headphones. With Prime, you can download the shows you want to watch for free and watch them without WiFi. I also downloaded some YouTube videos to my phone, uploaded them to my Google Drive, and made them available offline. This was very useful for car rides when the kids were fussy or just other times in general that they needed a quick video to calm down. I love the Super Simple song videos on YouTube for these types of things!

How do you travel with your two year old?