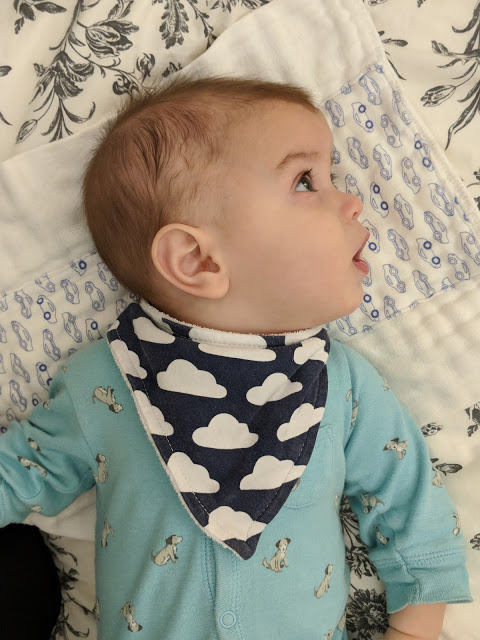 Here we are, at 6.5 months old, and what a rocky road it has been! Since my last update, I found a new resource on baby sleep that lays out the truth of how to get your baby to sleep in the most honest way… I have tried to implement it and it definitely was successful but then with illnesses, milk supply issues, and the holidays, we had a bit of sleep regression but are now pretty much back on track. I am lucky that my little guy HAS “STTN” (which for me, at this age, is defined as 12 hours with no wakeups) a handful of times, but he still doesn’t do it consistently. And as easy as it would be for me to say that all you have to do to sleep train your baby is put them to bed at night and don’t go back in until morning… which at this age is the only thing I think actually works…. It is just too hard to do that in the reality of it all. So, what I have decided to do is to only feed him once at night (after 2 am – and only if he wakes after that time) and to not respond to other wakings unless I see something on the monitor that needs attending to or if he’s especially sick or something. Some nights he has woken for a feed and other nights he has slept through… so I think we are in a transition period right now and I hope he will be consistently sleeping through soon.

Here is our current schedule. I pushed him to 2 naps a bit on the early side, mostly because I needed to not be tied down to the house at the 4 o’clock hour… now that it is so cold it wouldn’t be as much of a problem, but most days he really does well with the longer waketime in the evening. Sometimes, he does need a third nap if the first two don’t go according to schedule, but that has happened only 2 or 3 days during the past month.

Sleep routine:
Change diaper
Sleep sack (for cold nights, I double up with the muslin one plus a micro-fleece one such as this one)
White noise
Sing song
Lay in crib wide awake